Have you seen the movie "Food, Inc." yet? While I was anxious to see it, I was very disappointed when it never played in theaters in my area. The closest it played was an hour away. I was tempted to make the drive, but didn't want to do it alone. So I patiently waited for it to come out on video.

Alas, it has finally arrived to video and we rented and watched it last night. While I probably already knew 75 percent of the information in the movie, because I read so many books and keep up on such issues, there were some things I still learned. Some of the most interesting things to me was to see the choke-hold that big corporations have on smaller farmer's, thus forcing them into growing things their way.

While the whole movie was really interesting to me, I really appreciated the areas that focused on how the chicken has been re-designed, the information on high fructose corn syrup, and that hamburger meat is cleaned with ammonia. It was also eye-opening to hear that the average American eats 200 pounds of meat per year!

I think the most important message in this film is how the food industry is deliberately hidden from consumers. This is so true and hopefully this movie can help shed light on the topic to millions. As I've always said, and was repeated in the movie, we vote with our dollar every time we make a purchase.

This movie could help change the food industry if enough people watch it and take action. I highly recommend watching this film. Get the movie and plan a night to invite over some friends and family. Pop some popcorn and have everyone watch and learn.

Check out the trailer here: 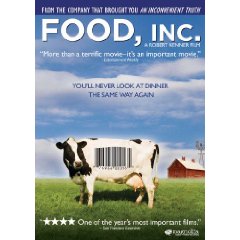 I've watched it twice since my GF gave it to me as an "early" Christmas present and each time I've found it downright unnerving the way farmers are treated by the big food corporations and Monsanto. There are a lot of good documentaries around that I have seen and want to see. Jacqueline... do you have others that you can recommend?

I totally agree, it is unnevering how the farmers are treated. I was not aware of the choke-hold that Monsanto had on farmers. So that part of the movie really blew me away. Plus, it has me looking at everything in my house that is soy, to see if they state they don't use GMO soybeans.

Other documentaries - Super Size Me, Earthlings, and there is another one that someone told me about after reading my review of Food, Inc. I have not seen it yet - the movie is called Fresh. You can learn more here: http://www.freshthemovie.com

There is also a movie you can watch right online, called The Future of Food. You can see that here:
http://www.hulu.com/watch/67878/the-future-of-food
Although at the time I am posting this I have not watched it all. I just came across it and am playing it now, but it looks interesting!

I knew there were others I've watched. I just went through my bookmarked links to find some movies that are online you can check out. These are some good videos: