Vegetarian Republicans? Yes, we do exist. 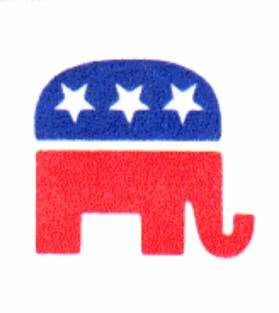 me because of my vegetarian ways. I can live with that. Possibly they feel this way because they get sick of me raising awareness about vegetarianism. Maybe it's because my home is a meat free zone. Or perhaps they don't like that I'm a constant reminder to something that they try to live in denial about (contributing animal abuse). But I've also come to realize that there are a lot of vegetarians that don't like me as well, but not because I'm a vegetarian. With them, it's because of my political views. Yes, I'm a vegetarian. But I'm also a Republican. Gasp!

Last year around the presidential election I had a conversation with some other vegetarians about the political candidates. They couldn't understand why a vegetarian would ever be voting Republican. They told me that clearly Obama was the better choice for a vegetarian, to which I replied that he is no more a vegetarian than McCain. Obama may be a liberal, but he is eating meat, people. In fact, I had at the time read that Obama's favorite place to eat was a burger joint called Five Guys. I took a quick look at that restaurant menu and found they don't even have a veggie burger to be found, my friends.

This difference in political beliefs was, and often is, too much for many of my fellow vegetarians to swallow. I don't mind that they are of a different political party, but they seem to feel it is a betrayal of some sort that I don't share in their liberalism. In another recent incident I posted a video on Facebook of a Fox News (yes, I'm a Fox News fan) clip where elementary kids were singing praises to President Obama. Along with it I wrote "Public schools are a scary, scary place, my friends."

Now, even if you have kids in the public schools, or went to them as I did, many parents would agree there are some concerns about today's educational system. But that post of mine prompted a vegetarian friend to internalize what I wrote and lash out. She claimed that, out of 135 Facebook friends, the post was about her and her education. She dropped me as a friend on the site, terminated our friendship, and told me that I was rude and made references to the differences in political views.

But I digress. Yes, I also care about the environment. I'm still a vegetarian Republican. I've looked at all the issues on both sides of the political spectrum and more of my beliefs fall in line with the Republicans. Guess what, I also have 11 tattoos. But I'm still a Republican vegetarian.

In fact, the Vegetarian Resource Group (a wonderfully informative and helpful group, by the way) conducted a study called "How Many People Order Vegetarian Meals When Eating Out?" which was published in 2008 and mentioned this issue. Among other findings, they report:

"...38.9 percent of Republicans sometimes order a dish without meat, fish, or fowl, while 38.8 percent of Democrats do the same. Therefore, ordering vegetarian dishes is a nice attribute we can all have in common, no matter what our other beliefs are."

They also break down some other statistics further, reporting on how many people ALWAYS order a vegetarian meal when eating out. Here's what they report:

So according to those numbers, there are a lot more vegetarian Republicans out there than me, thank goodness. But how did we get to a point where people have created a stereotype of always assuming that a vegetarian must be a liberal or Democrat? I know there are other vegetarian Republicans out there, but frankly I think some may try to hide it because of the wrath that is unleashed on them when others find out. Not only will they be drilled on a number of other issues that do not relate to vegetarianism, but they will likely get rude comments and some people, as has happened with me, will no longer want to be their friend.

It never bothers me if I find out that a fellow vegetarian is a Democrat, or any other political supporter. I'm just happy there is one more person abstaining from eating animals. So why on earth do Democrats or other liberals seem to always take issue with me when they find out that I'm a vegetarian that votes Republican? Sure, I may not agree with every single issue of the party, but most people don't agree with all with theirs either. But I do agree with enough of them to consider myself falling into that political category.

Can't we enjoy having vegetarianism in common, even though I may be a gun owner and against abortion (among other issues)? Making people feel as though they must change political parties to be a vegetarian (regardless of their reason to be vegetarian) is only going to push people away from vegetarianism. Do you want all people to embrace vegetarianism, or only those that vote the same way you do? Besides, if you can overlook things and vote for someone that dines on animal flesh, even though you are oppose to it, how come you also can't look past the fact that I vote differently, but we agree on that issue?

Regardless of what side of the political party you fall on, let's all try to be happy that we have found at least one major area of our lives we agree upon - vegetarianism. And as for the rest, let's just agree to disagree. I don't choose a candidate to vote for because of one issue, and nor should you.