Should Veterinarians be Vegetarian?

Last week Patty Khuly, a veterinarian, wrote an op-ed piece for the USA Today. Apparently she isn't too happy that people often ask her if she is a vegetarian or vegan, considering she is a veterinarian by trade. Her response, in short is that she is not.

My thoughts on the subject are this... when people take a job, any job they find advertised in the paper, they often take ones that are not always in line with their values. They do this because it is a means to an end. They have bills to pay and the job is legal and pays a weekly salary. Enough said. But when people go to college they are choosing a profession, for whatever reason.

The reason so many people wonder if veterinarians are vegetarians, or if they should be, is because it only makes sense that they would (or should) be.

To be a veterinarian, according to the dictionary, is to practice veterinary care. The definition for that is:

"of, relating to, practicing, or being the science and art of prevention, cure, or alleviation of disease and injury in animals and especially domestic animals"

In reviewing the definition, does it not make sense that veterinarians should be vegetarians, or more likely vegans? If you are eating animals, or their by byproduct (or wearing leather as she stated she still does) you are in no way aiding in the prevention, cure, or alleviation of disease and injury of an animal. Raising them for food and byproducts causes them to get diseased, hence all the antibiotics they are injected with, and always leads to them being slaughtered, which is pretty injurious (an act that damages or hurts).

Therefore I would say that a veterinarian that is not a vegetarian or vegan is one that is living in some denial. They spend their day helping animals, likely because they have a calling to do that type of work, and then turn away when it comes to eating them. They put it out of their mind that they are contributing to such atrocities. Even if you are eating free-range or from the farmer down the road, you are still contributing to the injury and death of animals.

She says: "For others among us, the issue of animal eating is defined more by traditions and culture than by professional selection — as it does for the vast majority of humanity."

But shall I remind her that unless she comes from a family of veterinarians she has chosen a different path already? I would argue to say that animal eating is not so much tradition and culture as it is the byproduct of habit and billion-dollar advertising budgets. There is no doubt that this is an issue that is not sitting right with her, like many other veterinarians, and rightfully so. This is not because people keep asking her about it, but rather because her morals are not in line with her actions. Deep down she knows how wrong it is to eat animals, especially when she has chosen a career to protect and help them, but she can't seem to get over the hurdle of eating them out of convenience, she likes the taste, or whatever other excuses she can muster up.

Writing this op-ed is one more chance at her trying to find peace with the decision to eat animals and have a career dedicated to helping them. It is almost like a cry for help for people to please leave her alone so she can eat meat in peace. But I believe that she will find no peace in her decision to eat them because as the famous quote goes - peace begins with what is on your plate. Further, I don't believe people should stop asking her if she is a vegetarian since she is a veterinarian. I think it's a fair question.

After all, would it be okay if a teacher taught all day and went home and beat kids all night? How about a doctor who helped the ill all day and then purposely contributed to spreading disease by night? A lawyer or police officer who broke laws when off the clock? Strange ideas, I know, but that's essentially what is happening when a veterinarian is not a vegetarian or vegan. Their career choice is in direct conflict with the way they are living their life, or trying to live it.

On another, and similar note, back a few years ago I wrote a book called "Careers for the Vegetarian and Animal Lover - (I also wrote the "Vegetarian Resource Book: A to Z Reference Guide to Vegetarianism.") While writing the career book I did include being a veterinarian as one of the logical choice. I also include in there a Q & A with Holly Cheever, a veterinarian who is a vegetarian. Thank goodness they are out there! 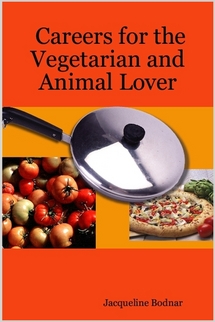