Helping them Make the Connection

How do you help your kids make the connection between food and animals? If you are like non-vegetarian parents, most of them are not honest with their children about where meat comes from. They may tell them that it’s special cows, that meat “comes from” animals, rather than being animals, or they may never address the issue at all. If you ask a young child if he or she would like to eat a cow, they will usually think you are being disgusting or silly. And that’s the way I want it to be with my kids.

We try to find ways to help our kids make the connection between meat and animals. There are a variety of ways that we do this. Some of them include: 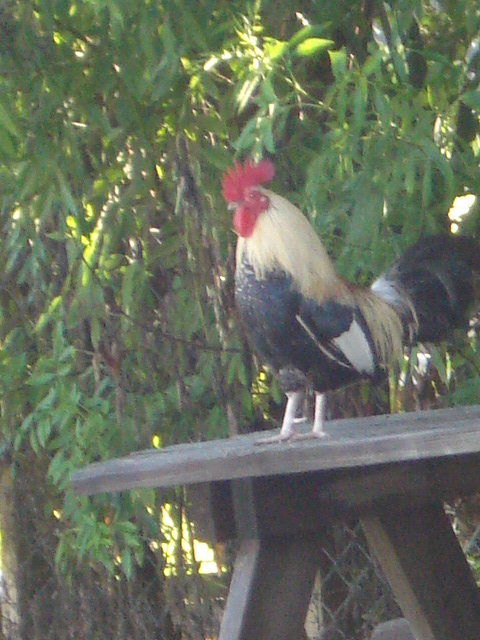 (one of our chicken friends)

Another thing we do is visit our chicken friends. There is a biker bar not far from our house that has free roaming chickens on their property. Every time we go by there we look for our “chicken friends.” Once in a while we stop and visit with them. The kids love to sit and watch the chickens. As we are there, I mention to them that some people eat chickens. I ask them if they would like to eat the chicken’s leg, breast, or other part of its body.

The great thing is that they find the thought of eating a chicken as weird as eating say a heron, egret, hawk, or eagle. They see a chicken as being like any other bird and don’t find any of them appetizing.

It is important to help children make the connection between animals and abuse, whether the abuse is eating animals, wearing them, or them being made to perform in a circus or aquarium.

Case in point, just yesterday we took the kids to story time at the library and there was a guest clown there who spoke about circuses to the group of preschoolers. She made it seem like circuses are wonderful and she really played up talking about the animals performing. One of the pictures she held up of a lion tamer showed him with a whip in his hand. I couldn’t wait for the segment to be over. and when it was and we went to the car I immediately had a discussion with the kids about what they had just heard and about circuses. I explained that circuses abuse animals, hence the whip in the hand of the lion “tamer.” We talked about how animals don’t want to be in circuses and why it is not a place we will take them (same with Sea World or other animal performing places). If they want to see a circus we will go to a Cirque du Soleil show, where they will see a circus minus the cruelty to animals.