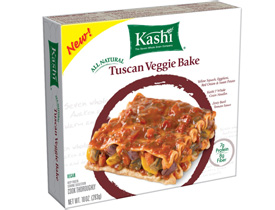 While recently on vacation we found ourselves needing something quick to eat that we could prepare in the hotel room that we had just checked into. My husband ran to a local store and came back with something new for us to try. He brought back a couple of the Kashi frozen entrees called the Tuscan Veggie Bake. It looked appetizing in the picture on the box, so we were off to a good start.

The dish is vegan and is labeled as such on the package. It has 700 mg of sodium, which is kind of to be expected from frozen entrees, but the calories and fat are not bad (260 calories and 9 grams of fat). The dish is akin to a vegetable lasagna, which contains yellow squash, eggplant, red onion, and sweet potato, along with noodles and a basil tomato sauce. We both really liked it and would buy it again when wanting a quick dish on the run.

Another dish that we both like, also from Kashi is the veggie medley pocket bread sandwich. This is a quick lunch option if you need something fast (good to take to work if you don't have time to do a lot of preparation). I usually have one on hand in the freezer that one of us will eat when we want something tasty without spending half an hour preparing something. You may want to sign up for the Kashi newsletter, as they often send out coupons for their products. I'm also a big fan of of their Autumn Harvest and Cinnamon Harvest cereals.

One several occasions my husband and I stop at a store to grab Amy's breakfast burritos when we stay in hotels. They not only taste good, but they are vegan, and are so much better and tastier than trying to find something on the run at area hotels. They cook up quickly and paired with some fruit and a chai, make for a good breakfast that holds us over until lunch.

All are good options, especially if you find yourself in a hotel with limited access to good restaurants and items to cook. Before you e-mail me to say that they are not healthy, high in sodium, are processed, etc., let me tell you that I am not saying they are the healthiest options in the world. But I am saying they are convenient, save you money over going out to eat (which most likely wouldn't be any healthier), and are vegan. Having some of these on hand, along with fresh fruits and veggies to pair it with, helps make for a good meal on the road.