Have you seen the documentary "Earthlings" yet? If not, now is the time. I first ordered the movie a few months ago when I heard about its release. I watched the trailer and it seemed like it was something that would be of interest to me. My husband and I watched the movie within days of ordering it. 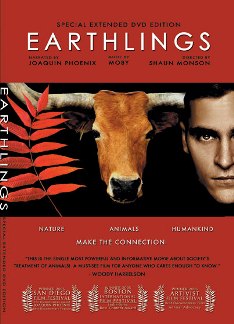 The movie can either be ordered online or you can attend one of the many screenings of it. If you do buy it, consider holding a screening for others. One thing is for sure – this movie packs a powerful message, which is that of making the connection. We are all connected and our actions have implications that are often far reaching and out of our sight.

Having been an ethical vegetarian since 1995, most of what I saw in the movie was not a surprise. Even so, some of the things were a first for me, especially the information about how animals are disposed in such numbers and ways in animal shelters across the country. Sitting through that part had me balling like a baby. But, as the creator of the movie points out, I just felt the pain of watching, the animals actually lived it.

Is it hard to watch? Yes. I would find it a bit odd if someone thought it wasn’t hard to watch such images of atrocities being committed on animals. But I think it is important that people have the opportunity to view the realities of what takes place in our world in regard to the treatment of animals. I also respected the fact that Joaquin Phoenix narrated the movie, putting his star power behind such a good cause that he believes in.

Some have said to me that you don’t need to see those disturbing images to “get it.” But apparently some people do, because the movie has a profound impact on those that watch it and weren’t already ethical vegetarians. It is hard to see such acts. Yet they happen each year to billions of animals.

I think the "Earthlings" movie was long overdue in its release. I’ve been in need of a powerful movie like this to add to my animal rights activist bag for a long time. It’s one that I will keep and pull out when necessary and when I can get people to sit through it. It’s certainly eye opening and has a powerful message.

I think Shaun Monson sums it up nicely in this short, yet powerful, video on Speciesism.